Read How can authors use William S. Burroughs Cut-ups technique in their own writing? 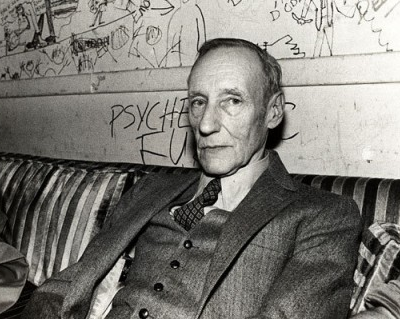 Burroughs discovered the cutup in 1959 in Paris through his friend Brion Gysin, a painter. When Gysin began experimenting with cutups in his own work, Burroughs immediately saw the similarity to the juxtaposition technique he had used in Naked Lunch and began extensive experiments with text, often with the collaboration of other writers. (Although Burroughs has credited Gysin with discovering the cutup, he has also acknowledged similar literary experiments in the works of Tzara, Stein, Eliot, and Dos Passos.) In 1960 Burroughs published his initial cutup experiments in Paris in Minutes To Go (with Brion Gysin, Sinclair Beiles, and Gregory Corso) and in San Francisco in The Exterminator (with Brion Gysin), works that were partially intended to introduce the technique to the public. Throughout the 1960s Burroughs and Gysin collaborated on cutup experiments in many media, the most significant collaborations being three films done in 1965 with English film maker Antony Balch (Towers Open Fire, Cut-Ups, and Bill and Tony) and The Third Mind, a book first completed in 1965 but not published in English until 1978. The final version of The Third Mind is both a historical collection of cutup experiments from 1960 to 1978 and a manifesto that sums up the cutup's significance for Burroughs and Gysin.

The cutup is a mechanical method of juxtaposition in which Burroughs literally cuts up passages of prose by himself and other writers and then pastes them back together at random. This literary version of the collage technique is also supplemented by literary use of other media. Burroughs transcribes taped cutups (several tapes spliced into each other), film cutups (montage), and mixed media experiments (results of combining tapes with television, movies, or actual events). Thus Burroughs's use of cutups develops his juxtaposition technique to its logical conclusion as an experimental prose method, and he also makes use of all contemporary media, expanding his use of popular culture.

As Burroughs experimented with the technique, he began to develop a theory of the cutup, and this theory was incorporated into his pseudoscience of addiction. In addition to drugs, sex, and power as aspects of man's addictive nature, Burroughs adds an analysis of control over human beings exercised by language ("the Word"), time, and space (i.e., man's physical existence and the mental constructs he uses to survive and adapt). Drugs, sex, and power control the body, but "word and image locks" control the mind, that is, "lock" us into conventional patterns of perceiving, thinking, and speaking that determine our interactions with environment and society. The cutup is a way of exposing word and image controls and thus freeing oneself from them, an alteration of consciousness that occurs in both the writer and the reader of the text. For Burroughs as an artist, the cutup is an impersonal method of inspiration, invention, and an arrangement that redefines the work of art as a process that occurs in collaboration with others and is not the sole property of artists. Thus Burroughs's cutup texts are comparable to similar contemporary experiments in other arts, such as action painting, happenings, and aleatory music. His theory of the cutup also parallels avant-garde literary theory, such as structuralism and deconstruction.

Burroughs's trilogy is based on the cutup and the theory of language and art that the cutup produced. Through the direct incorporation of cutup material, Burroughs also introduces into the trilogy important new material from popular science and popular literature: the Nova Mob, Nova Police and their training, Reich's orgone accumulators, Scientology's E-meter, sense withdrawal tanks, infrasound, reality as a film, popular evolutionary theories, more use of space/time travel motifs, the spy novel of international conspiracies, the idealized past of the western, and Burroughs's analysis of Mayan civilization and Hassan I Sabbah's legendary assassins. The most important addition from popular culture is the science fiction material, which Burroughs finds most appropriate to express his analysis of word and image controls and their destruction by the cutup technique. Cutup is equated with space/time, travel, silence, and freedom from the body. Burroughs also incorporates cutups from many literary authors: T. S. Eliot, Kafka, Shakespeare, Conrad, Graham Greene, and Coleridge are the most prominent in the trilogy, and their juxtaposition with banal popular materials is another example of Burroughs's pop-art technique, which integrates high and low culture.

"In his own words," Burroughs sets the method out:

Burroughs with his cut-ups 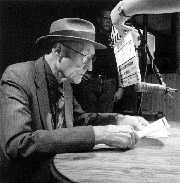 "Pages of text are cut and rearranged to form new combinations of word and image-In writing my last two novels, Nova Express and The Ticket That Exploded, I have used an extension of the cut up method I call "the fold in method"-A page of text-my own or some one else's-is folded down the middle and placed on another page- The composite text is then read across half one text and half the other-The fold in method extends to writing the flash back used in films, enabling the writer to move backwards and forwards on his time track-For example I take page one and fold it into page one hundred-I insert the resulting composite as page ten-When the reader reads page ten he is flashing forwards in time to page one hundred and back in time to page one-The deja vu phenomena can so be produced to order-(This method is of course used in music where we are continually moved backwards and forward on the time track by repetition and rearrangement of musical themes-

In using the fold in method I edit delete and rearrange as in any other method of composition-I have frequently had the experience of writing some pages of straight narrative text which were then folded in with other pages and found that the fold ins were clearer and more comprehensible than the original texts-Perfectly clear narrative prose can be produced using the fold in method-Best results are usually obtained by placing pages dealing with similar subjects in juxtaposition."

Here is another Burroughs take on the cut-up method:

"The cut-up method brings to writers the collage, which has been used by painters for seventy years. And used by the moving and still camera. In fact all street shots from movie or still cameras are by the unpredictable factors of passersby and juxtaposition cut-ups. And photographers will tell you that often their best shots are accidents . . . writers will tell you the same. The best writings seems to be done almost by accident but writers until the cut-up method was made explicit-all writing is in fact cut-ups; I will return to this point-had no way to produce the accident of spontaneity. You cannot will spontaneity. But you can introduce the unpredictable spontaneous factor with a pair of scissors.

"The method is simple. Here is one way to do it. Take a page. Like this page. Now cut down the middle. You have four sections: 1 2 3 4 . . . one two three four. Now rearrange the sections placing section four with section one and section two with section three. And you have a new page. Sometimes it says much the same thing. Sometimes something quite different-cutting up political speeches is an interesting exercise-in any case you will find that it says something and something quite definite. Take any poet or writer you fancy. Here, say, or poems you have read over many times. The words have lost meaning and life through years of repetition. Now take the poem and type out selected passages. Fill a page with excerpts. Now cut the page. You have a new poem. As many poems as you like. As many Shakespeare Rim baud poems as you like. Tristan Tzara said: "Poetry is for everyone." And André Breton called him a cop and expelled him from the movement. Say it again: "Poetry is for everyone." Poetry is a place and it is free to all cut up Rimbaud and you are in Rimbaud's place. Here is a Rimbaud poem cut up.

"Visit of memories. Only your dance and your voice house. On the suburban air improbable desertions . . . all harmonic pine for strife.

"The great skies are open. Candor of vapor and tent spitting blood laugh and drunken penance.

"Cut-ups are for everyone. Anybody can make cut-ups. It is experimental in the sense of being something to do. Right here write now. Not something to talk and argue about. Greek philosophers assumed logically that an object twice as heavy as another object would fall twice as fast. It did not occur to them to push the two objects off the table and see how they fall. Shakespeare Rimbaud live in their words. Cut the word lines and you will hear their voices. Cut- ups often come through as code messages with special meaning for the cutter. Table tapping? Perhaps. Certainly an improvement on the usual deplorable performances of contacted poets through a medium. Rimbaud announces himself, to be followed by some excruciatingly bad poetry. Cut Rimbaud's words and you are assured of good poetry at least if not personal appearance.

"All writing is in fact cut-ups. A collage of words read heard overheard. What else? Use of scissors renders the process explicit and subject to extension and variation. Clear classical prose can be composed entirely of rearranged cut-ups. Cutting and rearranging a page of written words introduces a new dimension into writing enabling the writer to turn images in cinematic variation. Images shift sense under the scissors smell images to sound sight to sound to kinesthetic. This is where Rimbaud was going with his color of vowels. And his "systematic derangement of the senses." The place of mescaline hallucination: seeing colors tasting sounds smelling forms.

"The cut-ups can be applied to other fields than writing. Dr Neumann in his Theory of Games and Economic behavior introduces the cut-up method of random action into game and military strategy: assume that the worst has happened and act accordingly. If your strategy is at some point determined . . . by random factor your opponent will gain no advantage from knowing your strategy since he cannot predict the move. The cut-up method could be used to advantage in processing scientific data. How many discoveries have been made by accident? We cannot produce accidents to order. The cut-ups could add new dimension to films. Cut gambling scene in with a thousand gambling scenes all times and places. Cut back. Cut streets of the world. Cut and rearrange the word and image in films. There is no reason to accept a second-rate product when you can have the best. And the best is there for all. Poetry is for everyone . . ."

How can authors use William S. Burroughs Cut-up technique in their own writing?

William S. Burroughs' cut-up technique is a writing technique that involves cutting up words, phrases, and sentences, and then rearranging the pieces to create new and unexpected combinations that allow writers to break free from conventional forms of expression.

Authors can use Burroughs' cut-up technique in their own writing in a number of ways:

💡Authors can use this technique to take an existing text, such as a newspaper article or a passage from a book, and cut it up into individual words, phrases, or sentences and then rearrange the pieces to create new and unique combinations that reveal new meanings and connections.

💡An author could take a piece of their own writing and cut it up into individual words, phrases, or sentences.

💡Cut-ups can also be used as a way to generate new ideas, starting points, and prompts for new writing, using the cut-up pieces to inspire and guide.

Burroughs' cut-up technique can be a powerful tool for authors looking to break free from conventional forms of expression and to uncover new and previously unimaginable meanings in their writing.