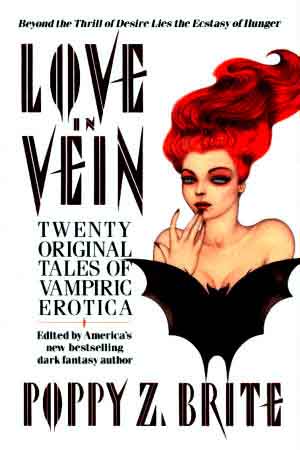 Contents:
Do Not Hasten to Bid Me Adieu by Norman Partridge
Geraldine by Ian McDowell
In the Greenhouse by Kathe Koja and Barry N Malzberg
Cafe Endless-Spring Rain by Nancy Holder
Empty Vessels by David B Silva
The Final Fete of Abba Adi by Jessica Amanda Salmonson
Cherry by Christa Faust
White Chapel by Douglas Clegg
Delicious Antique Whore by Wilum H Pugmire
Triptych di Amore by Thomas F Monteleone
Queen of the Night by Gene Wolfe
The Marriage by Steve Rasnic Tem and Melanie Tem
In This Soul of a Woman by Charles de Lint
The Alchemy of the Throat by Brian Hodge
Love Me Forever by Mike Baker
-And the Horses Hiss at Midnight by AR Morlan
Elixir by Elizabeth Engstrom
The Gift of Neptune by Danielle Willis
From Hunger by Wayne Allen Sallee and
A Slow Red Whisper of Sand by Robert Devereaux

Synopsis
An original collection of twenty stories - by a wide range of powerful authors - celebrates the intimate and seductive fantasies of vampiric erotica.

From Booklist
Like scotch or very dry martinis, these 20 servings of "vampiric erotica" may be for many a resistible acquired taste. Those who do wind up enjoying this controversial new literature that goes "deeper than horror, beyond fear, to explore our darkest, most intimate hungers" may, however, find this anthology intoxicating. In it, the beast is beautiful, a situation probed by Charles de Lint, Gene Wolfe, and less-known others. Celebrating "unspeakable intimacies," the stories explore the subversive appeal of vampirism in all its manifestations as readers meet a color-blind veterinarian mysteriously - and, without regular refills, only temporarily - restored to a world of color by a strange elixir from a prostitute's third nipple; a vampire whose dying, mortal wife has nourished him for years by allowing him to hurt her, then draw her sensations of fear and pain from her for his own sustenance; and a pair of lesbians who literally copulate the father of one to death. Not as mainstream as Ann Rice, this anthology might be most comfortable in extensive and specialized horror collections. - Whitney Scott

Reviews of Love in Vein: Twenty Original Tales of Vampiric Erotica
Explore Language Is A Virus


Languageisavirus.com exists to cure writer's block and inspire creativity. You can choose from a multitude of writing games, gizmos, generators, writing prompts and exercises, tips, experiments and manifestos from infamous avant garde writers and how-to articles on fiction writing and poetry.