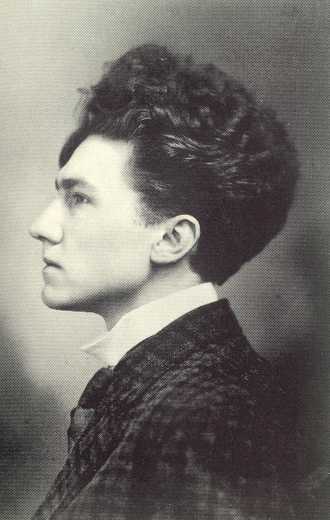 from Ezra Pound "A Retrospect," in Literary Essays of Ezra Pound, © 1918, 1920, 1935 by Ezra Pound. Reprinted by New Directions Publishing Corporation.

In the realm of poetry, there are few figures as influential and controversial as Ezra Pound. A pioneer of the Imagist movement, Pound sought to strip poetry of its excesses and return it to its essence: the image.

Pound's principles of Imagism can be summed up in three main tenets: 1: direct treatment of the "thing," whether subjective or objective; 2: the use of precise, concrete imagery; and 3: the use of a musical rhythm in the language.

1: The "thing" in Pound's poetry refers to the subject matter of the poem, whether it be a physical object or an abstract idea. The Imagists sought to present this "thing" in a direct and unadorned manner, free from the excesses of Romanticism and Symbolism. The image, in its purest form, should be the starting point of the poem, from which the rest of the work flows.

2: The use of precise, concrete imagery is integral to Pound's principles of Imagism. The Imagists sought to create a sharp, clear picture in the mind of the reader, using simple and direct language. By using concrete imagery, the poem is able to convey a sense of reality and immediacy, drawing the reader into the world of the poem.

Pound's principles of Imagism represent a radical departure from the excesses of traditional poetry, seeking to strip the art form down to its essence: the image. The use of direct treatment of the "thing," precise, concrete imagery, and the use of musical rhythm in the language creates a sense of reality and immediacy, drawing the reader into the world of the poem.